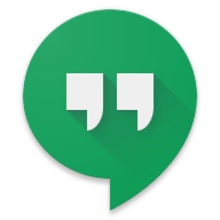 Download Hangouts for Android: Hangouts is the application for the famous Google service for instant communication between users, which came as an alternative to the Google Talk application.

It is an old service for Google via computers and was added to the Google Plus application, then turned into an application for smartphones like most Google services, which is originally a simple program that does not always require a login, which is Google’s competitor to the application “iMedjj” for the iPhone devices.

The Hangout service had a major role in the spread of distance education in its beginnings, as professors were taught through the service to their students in limited numbers, and it was the widespread service for the media and scientific conferences.

The origins of Hangouts

Download the Hangout program for Android Google has started developing its service for video communication via video and instant chatting, Hangouts, and launched it for the first time in 2011, incorporating it into its social networking service, Google Plus, as a way to communicate instantly within it.

The Hangouts technology within Google Plus was a service for video chats, whether single or double, and then the conversation points were multiplied to reach the number of people up to 10 people, which is a relatively large number at the time.

The Hangouts service spread rapidly around the world due to the need for it for scientific and cultural meetings around the world, in addition to the contacts that the various media used to make to its correspondents all over the world, even those hot spots, and press conversations spread with senior figures through the Hangout service, especially with the advantages of broadcasting Live Hangout session.

It launched the first version of the standalone Hangouts app on May 15, 2013, and had the same benefits as the service found within the Google + service.

Advantages of the Google Hangouts app