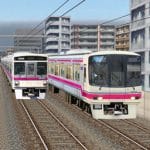 2021 3D Train Studio Standard is a wide and professional application that supports railway transport track network design, it enables joint creation of not only suitable railway but also other infrastructure, which is important all the time based on attractive 3D design model.